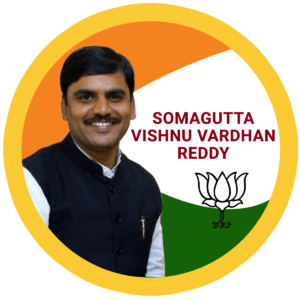 No one is a born leader, even me. I was born in a middle-class agricultural family to Late Shri S.Mastan Reddy and Srimathi akshmi Revamma. There were so any instances that provoked me to choose politics from the early college itself. One among them is the district I have born, it is one of the top 10 Districts in India, which is listed in thebackward categories which will face the highest amount of drought and most of the families in the district are near to the poverty line. I was the youngest child in the family but had a different mindset compared to my brother Jaya Chandra Reddy and Sister Prabhavathi. It’s been a long journey from the day I began as a student leader a couple of decades back through Akhil Bharatiya Vidyarthi Parishad (ABVP). In the path,

there were a lot of challenges to face and a lot of hurdles to cross,which were never known. It was never easy, as you might think but, it was the desire to serve the nation and the people, which made me passionate.With every passing year, I was re- creating myself and re-generating theenergy to be a public servant to change the lives of many. Forgetting the challenges and hurdles in the path, I have been moving ahead with not a constant but growth. From nowhere, I have come across the thorns,despairs, obstacles, and now I can raise my voice against the odds happening in the state of Andhra Pradesh, representing the Bharatiya Janata Party as a state General Secretary. It was not luck but had an immense struggle to fight for the people of the region. My journey has started as a student union member in ABVP in 1992, later I have been named as the Taluka secretary, District Secretary, District President, State Secretary, and National Executive Member. The Journey does not stop there it has just begun. I was named as the District Secretary of BJYM ( Bharatiya Janata Party Yuva Morcha) in 1998 when my political career picked up the pace. Later, I was named as the District General Secretary, District President, State Secretary, and as the State President two times. After being served the people at different positions and roles I have been named as BJP General Secretary for Ananthapur District. Later, as BJP Ananthapur District President, State BJP Training & Ideological Cell Co-Convener for Andhra Pradesh, State Vice-President.